The Tipi: The Connection to the Physical and Spiritual

Last year I wrote an article about “Tipi Etiquette” and wanted to further explain how the Tipi was (and still is) considered the connection to the world around us.

First I will begin with the actual word ‘tipi’, which is a Lakota word meaning “to dwell” or “dwelling”. Many Plains Tribes lived in tipis and all considered their dwellings as the extension of their physical and spiritual life. This starts right from the actual construction, and even though tipis vary in size and purpose, my explanation is a more general view.

To begin, 3 poles are used to anchor the structure and represents the past, present, and future of life. Another 7 poles are then placed around these 3 main anchors in a clockwise position. Each of these poles have specific meanings; such as the Seven Brothers or the Seven Stars of the Big Dipper constellation. In other words, the 7 sites that the Lakota see as sacred; the Seven Sacred Sites. Examples of some of these sites would be: the western side of the Black Hills, Devils Tower, Bear Butte and Hells Canyon, to name a few.

Once all 10 poles are erected, a cover was placed over the whole structure and an additional 2 poles are places on the outside, holding the flaps open at the top of the tipi. This helps to regulate the flow of energy and circulates air throughout the inner part of the lodge.

Symbolically, the completed 12 poles represented the 12 months of the year, the formation of time and seasons. Once the lodge is completed, the inner part would be seen, not only as the physical protection from the weather but the connection to the spirit world. In old times it was believed that the vortex, the point at which the poles are tied, connects us to the spirit world. The ancestors live in this spirit world in the upper reaches of the tipi, therefore, our ancestors are always with us. The tipi’s shape represents the sacred circle or the never-ending cycle of life.

Blackfeet lodge with mountain and stone pattern at base.

In addition to the deeper meaning of the actual structure of the tipi, the designs on the outside were also just as significant. For example, lodges with bears on painted on the external parts were usually seen as belonging to members of the Bear Medicine Society. Individuals from this society were responsible for healing those who were wounded in battle. The distinctive red or blue color with white spots at the foot of the tipi, usually belonged to the Blackfeet Tribe. This represented the mountains and rocks around them. However, many designs were painted from the dreams the owner had, and therefore the meanings had a more private and individual interpretation and lost over time.
Even though not all interpretation of tipi designs are known, what is acknowledged is that the tipi embodies the understanding of the connection between the physical and the metaphysical realm, and to live in it meant everything was in balance and harmony.

A Gift from the Prairie Chicken Nation

Hi all, and OMG I finally have had time to copy down some of my thoughts. Sorry it had taken so long, and please forgive me, as i am preparing my 2015 promotional trip.

Anyway, today i wanted to write about one of my favorite Native American dances; the Chicken Dance. Many people would of seen this at a pow wow (wacipi), but the origins is what brings the soul to this sacred gift.

The Prairie Chicken Dance (or Chicken Dance) is one of the oldest forms of Native American dancing. There is some controversy over the origin of this dance, however, most would agree that either the Blackfoot or Cree Nations from Canada where the first to practice it. What can be agreed upon though, is that it was a sacred dance (of the Kiitoki Society), given to a Warrior by the spirit of a Prairie Chicken. 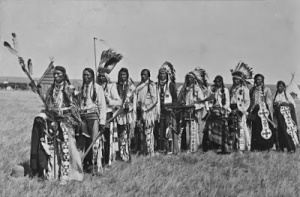 Blackfoot Warriors from the Kiitoki Society.

Long, long ago, legend tells of a Warrior who was out hunting. As he was searching for food he came upon a thumping noise that resonated through the earth. The man’s curiosity impelled him to search further and follow the strange vibrations traveling up through him body. As he walked closer, the sound became louder and more intense, and when he reached to area where the noise was resonating from he saw a group of Prairie Chickens dancing in the long grass.
Now, for a bit of an intermittence in this story.

If you have never seen the mating dance of a Prairie Chicken, it is the most amazing thing to see. The males have their heads down and tails up, both wings stretched out on each side, and their little legs are going a hundred to one in circles around the females. There are a number of different types of Prairie Chicken, and where I am from, on the Pine Ridge Indian Reservation, we also call 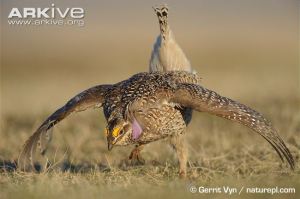 them Prairie Chicken or Sharptail Grouse (Siyoka in Lakota).

Back to the story now. 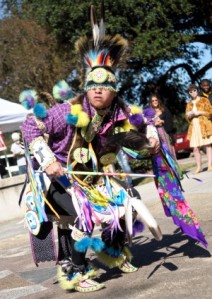 Thank you to everyone for listening. Have a great day.

Travel Tales With A Twist

n. frugality; the quality of being economical with money or food.